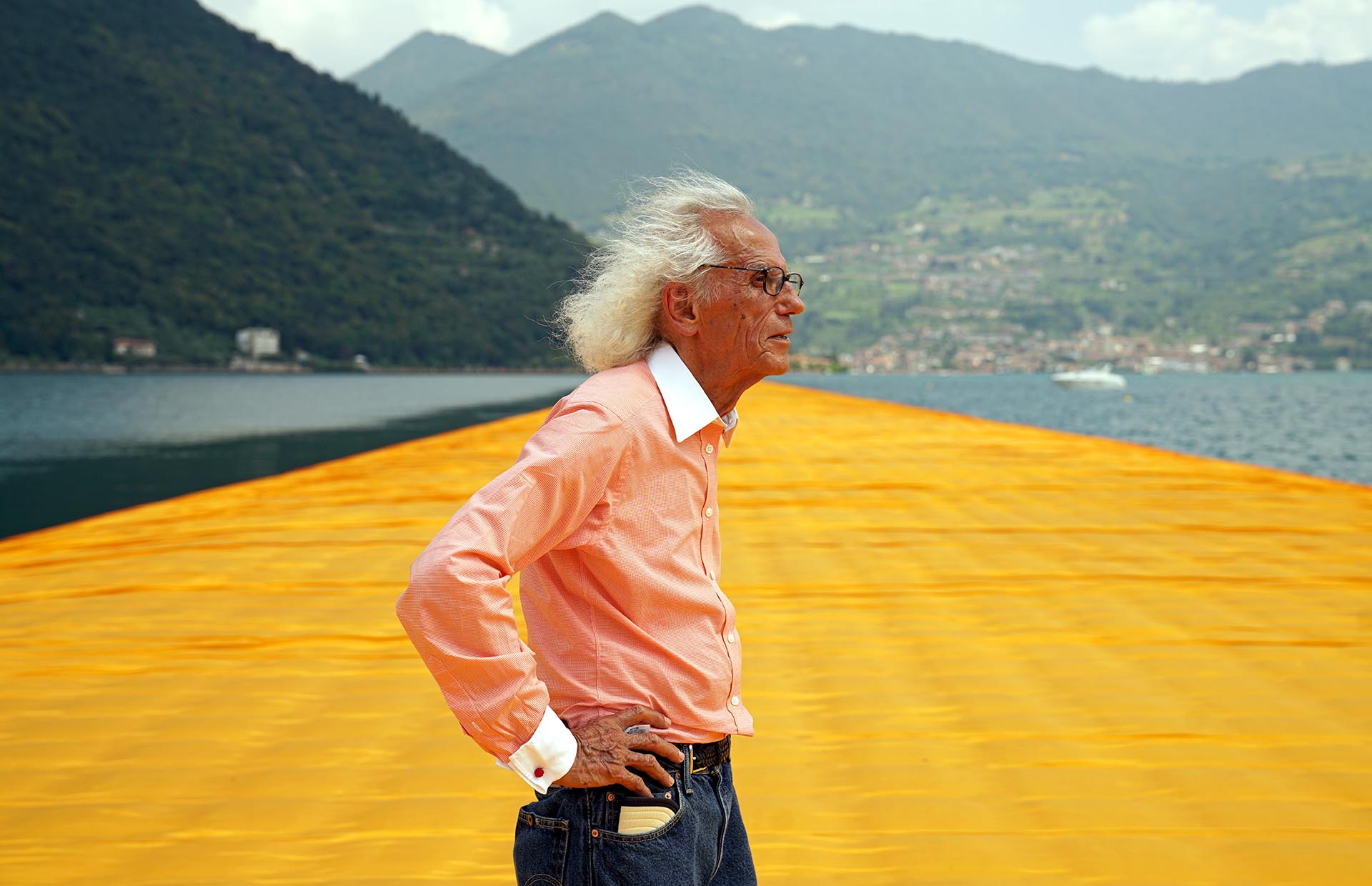 Christo, is the artist name under which the joint work of Christo Vladimiroff Javacheff, and Jeanne-Claude Denat de Guillebon. This artist couple became famous both for the gigantic scale of their work and for its ephemeral nature.

Born in Gabrovo, Bulgaria, he calls himself a Macedonian Bulgarian of Czech origin. His father owned a chemical factory and his mother was General Secretary of the Sofia Academy of Fine Arts until 1931. His mother had fled Macedonia in 1913. Christo’s family served as a refuge for artists and friends fleeing the Allied bombing of the cities.

Christo’s childhood memories also include the corps of partisans executed in the streets and the entry of the Red Army into Bulgaria in 1944. Christo’s father was harassed and imprisoned by the new communist regime for “sabotage”. It can therefore be said that Christo’s childhood was quite rough and that it surely had an important impact on the artist. Very early he had contact with art. At the age of 6, he made portraits of many women of the village. In 1953, he began his artistic training at the Sofia Fine Arts School where he studied painting, sculpture and architecture until 1956. He was commissioned by the ruling power to arrange the surroundings of the Orient-Express train to give western passengers a laughing image of Bulgaria. However, because of the regime’s strong propaganda, only true supporters of the Communist Party could get the diploma, which Christo was not. Indeed, Christo defied the system by painting canvases that went against the ideology (like peasants resting). So he had some trouble with the socialist realism that was the norm and which imposed a Marxist-Leninist treatment of subjects as well as style. In 1956 he decided to flee to Vienna.

He moved to Paris in 1958. For a living he made oil portraits which he signed with his name “Javacheff” and it was while delivering the portrait of the wife of General Jacques de Guillebon, director of the Ecole Polytechnique, that he met their daughter Jeanne-Claude, a “flamboyant redhead as if wrapped in plastic film”. In 1963, he met the group of new realists. His first works are abstract paintings and packaging of objects (bottles, cans, cardboard boxes, tables, etc.) or live models in canvas or plastic.

French, she was born in Casablanca, Morocco (where her father, an army officer, was stationed) – she and Christo would have been born on the same day at the same time. Her mother, Précilda, was 17 years old when she married Jeanne-Claude’s father, Major Léon Denat. Précilda and Léon Denat divorced shortly after Jeanne-Claude’s birth and Précilda remarried three times.

During the Second World War, Jeanne-Claude lived with her father’s family while her mother fought in the French Resistance. In 1946, Précilda married the influential General Jacques de Guillebon. The family lived in Bern from 1948 to 1951, then in Tunisia from 1952 until their return to Paris in 1957. She passed her baccalaureate in philosophy and Latin in 1952 in Tunis.

She met Christo Javacheff in 1958, the year that marked the beginning of their artistic collaboration. Christo was already working in Paris as an artist; the following year, she left her husband to marry Christo. Christo is rather the artist, and Jeanne-Claude is the organizer: “The creations for outside are signed by Christo and Jeanne-Claude, the drawings by Christo. »

After emigrating to the United States in 1964 and settling in New York, they began to carry out large-scale projects, intervening directly and ephemerally on buildings, monuments or entire landscapes.

Jeanne-Claude is best known for her work in collaboration with her husband Christo. A visual artist specializing in the environment, she was originally described as a publicist and entrepreneur for her husband. But from 1994 onwards, she received the same attention as him in all creative and administrative aspects of their work. Both are recognized as co-authors of each of their installations, with Christo developing their projects with the help of models and drawings, while Jeanne-Claude is in charge of their realization. Her tenacity is legendary. Spokesperson for the couple, she spends several years defending their projects at numerous public hearings, in court and during parliamentary sessions. For example, it took the two artists ten years to package the Pont-Neuf in Paris (1985) and twenty-five years of preparation before they were able to package the Reichstag in Berlin, Germany (1995).

Jeanne-Claude was working on a project, conceived in 1992, to suspend a canvas ten kilometres above the Arkansas River (Colorado) when she died in November 2009 in New York City from a ruptured aneurysm.